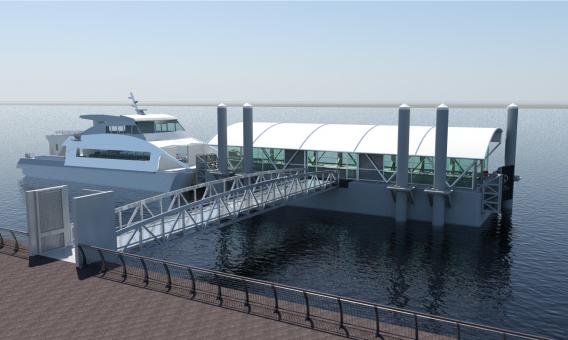 Mayor Jimmy Davis is announcing that the City of Bayonne has received a Term Sheet from the Port Authority of New York and New Jersey that will open the way to formal negotiations that are expected to result in a new Ferry Terminal at the former Military Ocean Terminal (MOTBY). Bringing commuter ferry service to Bayonne has long been a priority for Mayor Davis as well as previous administrations, however this new development is the first concrete step towards that goal. The proposed location for the ferry terminal will be at the south side of MOTBY approximately half way down the pier across from the Bayonne Golf Course. The Ferry will be within walking distance of many of the new developments underway and will have ample parking.

“With the development of MOTBY finally moving forward after decades of inaction and broken promises, Bayonne is truly on the brink of a total revitalization that will secure our city’s future for the next 100 years — but the missing piece has always been commuter ferry service,” said Mayor Davis. “This is a true game changer for Bayonne that will help us continue with the development of MOTBY and it will give our residents another option to commute into Manhattan.”

The City will soon be releasing a Request for Proposals that will allow ferry operators a chance to bid on the right to build and operate the commuter terminal. RFPs are expected to be released in April and submissions will be due later this Spring. The ferry terminal will add to the continued development of the MOTBY site that has occurred under Mayor Davis’ leadership, with hundreds of units of new housing already in place, additional mixed-use developments under construction and a new Costco soon to be breaking ground.

The development of MOTBY has always been important to the future financial success of Bayonne. “We are finally beginning to deliver on the promises made decades ago, that will mean millions of dollars in new tax revenue, expanded transportation and more investments in the things residents need, like renovations to our parks and expanded services,” said Mayor Davis.