$2.5 Billion in new real estate value is on its way to Bayonne thanks to economic development policies put into place by the Davis Team. This means new mixed-use residential developments near public transit, major commercial projects attracting national retailers, a new state-of-the-art medical facility right in the heart of Broadway and more. These new developments will mean $10 million in new annual tax revenue, lower property taxes, thousands of construction and permanent jobs, the revitalization of Broadway, higher property values and a bright economic future for Bayonne.

“Four years ago our team was elected to revitalize Bayonne, and I’m so proud of how far we’ve come in such a short time,” said Mayor Jimmy Davis. “We implemented an aggressive economic development agenda that is creating a brighter future for our city.”

The success of the Davis administration’s economic development initiative is evident at 19 East, a soon-to-be completed luxury apartment complex built on a formerly blighted property. Located just off the corner of Broadway and East 19th Street, the project is located steps from the 22nd Street Light Rail Station and it is expected to attract young professionals commuting to New York and Jersey City via public transit. That means that the city will benefit from significant new tax revenue without adding many children to local schools or cars to local streets and while preserving the unique residential character of the surrounding neighborhood.

Another major project helping to revitalize Bayonne is the new RWJBarnabas Health at Bayonne outpatient medical facility, located on Broadway in the heart of the city’s downtown area. Replacing a row of storefronts that had been consistently vacant for years, the medical facility is contributing $300,000 in annual tax revenue and creating hundreds of high-paying medical jobs. RWJBarnabas Health at Bayonne is a signature piece of the city’s rebirth and proof that major players in varied fields are investing in the city.

Commercial businesses are also making major investments in Bayonne, with one such development happening at Route 440 and East 22nd Street. An outdated industrial site is being transformed into a vibrant retail center that includes  recently-opened QuickCheck store joined by a Burger King, and an AutoZone. Together, the site is expected to employ over 75 Bayonne residents. With new residential developments coming to Bayonne and the city growing, additional commercial spaces will continue to arrive that will create even more jobs and tax revenue. 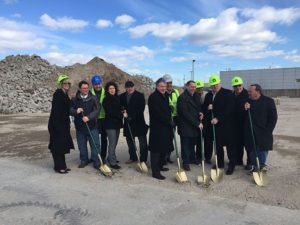 Each of these successful redevelopment initiatives, as well as others that are currently planned, are designed to compliment the 22nd Street Light Rail corridor and encourage walkable, sustainable development. The Davis administration targeted the area as the first part of the city to be aggressively redeveloped, and similar results are expected to be seen in coming years near the city’s 8th Street, 34th Street and 45th Street stations.