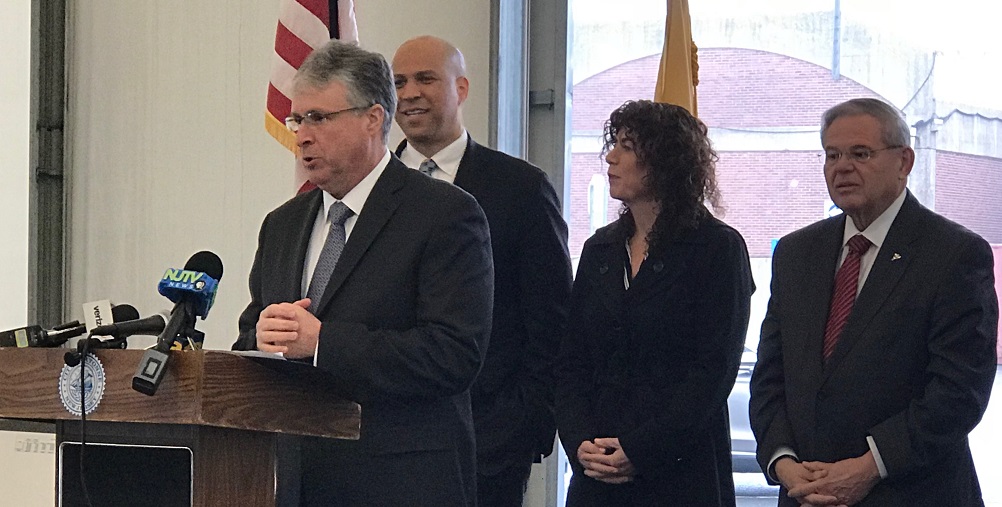 Mayor Jimmy Davis was joined today by U.S. Senators Bob Menendez and Cory Booker to  announce that the owner of a significant parcel of land on the former Military Ocean Terminal at Bayonne (“MOTBY”) has agreed to sell the site to a local real estate firm as part of its plan to redevelop a significant area of the MOTBY peninsula. Highstar Capital, the site’s current owner, and East Rutherford-based Lincoln Equities Group, the purchaser, have entered into a purchase and sale agreement for the parcel on the northern side of MOTBY. In negotiating the agreement, Highstar Capital worked with Ports America Group, Inc., the current manager of the site. The closing of the sale is anticipated for May 2018.

Lincoln Equities Group plans to construct up to 1.6 million square feet of modern, “next generation” industrial warehouse space on the property, continuing the growth of the Hudson County waterfront and the redevelopment of those areas located in Bayonne. The redevelopment will provide new waterfront facilities to facilitate trade in the Port of New York & New Jersey and will result in upwards of 2,700 new jobs for the State of New Jersey.

“We look forward to working with Lincoln Equities Group as they transform this area of MOTBY, creating jobs and fueling the City, County and State economies,” Mayor Davis said. “Redeveloping this area has long been part of our plan to restore jobs to Bayonne.”

Mayor Davis added that the City is excited that the revitalization of the site will once again help fuel Bayonne’s economic engine.

“Our ports are gateways to global commerce and engines of economic growth,” said Senator Menendez. “A modern and efficient freight network helps businesses all over our region get their goods to market.  By allowing these businesses to grow, we’re creating new employment opportunities throughout New Jersey. I’d like to commend Mayor Davis and the Bayonne City Council for their work on the MOTBY Site and their commitment to its re-development. Re-development projects like this are a win-win for Bayonne. Good industry brings in good, high paying jobs that create a tax base that will serve as the backbone of the Bayonne economy for years to come.”

“Smart investments in our ports and infrastructure networks are proven ways to spur economic development, bolster our region’s economy, and create jobs,” said Senator Booker.  “With its strategic location and robust transportation networks, Bayonne is on the path to becoming a thriving logistics hub. I applaud Mayor Davis’ innovation and leadership in Bayonne’s resurgence and his commitment to moving this great city forward.”

“We look forward to working with the City of Bayonne to reclaim this underutilized site, and transform it into an economic powerhouse that will further accelerate the Northern New Jersey economy,” said Joel Bergstein, President of Lincoln Equities Group, adding that the new construction will finally allow the site to reach its full economic potential.

In 2000, MOTBY was given to the city and was declared to be Bayonne’s property. For more than a decade, there has been little development on this waterfront parcel that spans 94 upland acres.

“Bayonne has had a long history as an industrial city, this project is a great opportunity to restore a part of Bayonne’s success and bring it back on the map,” said Council President Sharon Ashe-Nadrowski.

MOTBY has a proud history, originally a naval base and later re-purposed as an U.S. Army base, which closed in 1999. The U.S. Army base was used to ship both troops and equipment during the Persian Gulf War as well as during operations in Somalia and Haiti.